Announcing Learn WinUI 3.0 from Packt Publishing and a Contest

I'm thrilled to announce that my new book from Packt Publishing, Learn WinUI 3.0, was published in late March. You can buy your eBook or print copy today from Amazon or Packt's web site.

Windows UI (WinUI) 3 is Microsoft's next generation library for creating Windows applications with Fluent Design. WinUI 3 was released in March with Project Reunion 0.5 and is fully supported for building Win32 applications. Learn more about WinUI and Project Reunion on Microsoft Docs here.

I would like to thank Nick Randolph, who was the technical reviewer for the book. His feedback on the book's chapters and sample code were instrumental in delivering a great resource for Windows developers. I was lucky to have him involved in this project. If you aren't already following Nick's blog, go check it out now. He has been posting some great WinUI, Reunion, and Uno Platform content in recent weeks.

If you would like to win a print copy of Learn WinUI 3.0, read on. I am going to give away four copies of the book to readers of four of my blogs:

Leave a comment on this post on any of these blogs with the name of your favorite Windows or .NET development blogger. I will pick a random comment from each blog to select the four book winners. You can comment on each blog if you like, but please only comment once on each post. Comment moderation is enabled on all the blogs, so it could take a little time for your comment to appear. Make sure you sign up with a valid email address when leaving a comment. The contest closes at 11:59PM EDT on May 14th, 2021. I will ship books to winners worldwide. Please allow some time to receive the book if you are outside of the U.S.

Good luck and I hope you all enjoy my book! If you already have a copy, win one, or buy one, please leave honest ratings and reviews on Amazon. Thanks!

My WinUI 3.0 Book Is Available for Pre-Order

I have another update about my upcoming book from Packt Publishing, Learn WinUI 3.0. We are currently targeting a late March release for the book, and it is now available to pre-order on Amazon and Packt's websites. Here are the links for each:

On January 20th, the WinUI team announced three releases for Project Reunion and WinUI 3 in 2021:

Want to learn more about the current status of WinUI 3? You can watch the recording of the January Community Call on YouTube here.

If there are any changes to the publication date based on WinUI release changes, you can find out by subscribing to my Learn WinUI 3.0 newsletter here. I am currently working on the final revisions for each chapter to ensure the text and sample applications are all accurate and compatible with the supported WinUI 3 releases.

Hello Windows developers! We've nearly reached the end of 2020, and I wanted to provide a couple of updates.

First, an update on the TechBash developer conference that I help to organize. We had to cancel our 2020 event due to the pandemic. TechBash 2021 is currently planned for October 19-22, 2021 at the Kalahari Resort in the Poconos. We will be working closely with the venue to ensure that we can host a safe in-person event next fall. We are hoping that the vaccine roll-out throughout 2021 will make this possible. Watch for the call for speakers in February. Sign up for the TechBash newsletter or follow us on Twitter to stay informed.

In other news, the book I'm writing for Packt Publishing, Learn WinUI 3, has been pushed back to an early 2021 publication date. We've decide to delay it to publish closer to the delayed WinUI 3.0 launch from Microsoft. For more information about the book and its release, check out my recent newsletter. You can sign up to receive updates on the book, including when pre-orders are available.

Finally, I've refreshed the look of my primary blog, The Morning Dew. Check it out and let me know your thoughts. I have received some feedback that the link font is difficult to read on some devices, and I am working on improving that.

I hope you all stay safe and healthy during these difficult times. I hope to see many of you at events in late 2021 and 2022. Happy new year!

Summer is winding down, and I realized it's been months since I have posted anything on my WPF, UWP, and WinUI Tips blogs. I have been hard at work writing my first book, Learn WinUI 3.0 from Packt Publishing, this year. The project started in January, and I am about to start writing the first draft of the fourteenth (and final) chapter. I haven't been given the exact publication date, but it should be available about the same time that Microsoft releases Preview 3 of WinUI 3 in November, maybe a little earlier.

The November release of WinUI 3 was originally going to be Preview 4. While preview 3 isn't going to have the "go-live" moniker that Preview 4 was targeting, it is still expected to be the final preview before WinUI is released in 2021. When in 2021? Well, Microsoft isn't saying yet. However, there are two big events in the first half of 2021, another Ignite conference in early 2021 (March?) and Microsoft Build later in the first half of 2021 (June?). With November's preview likely being the final preview, I would guess that it will RTM at the Ignite event in early 2021.

While the book will be published with Preview 2 bits as the basis for the code and instruction, I will keep the book's GitHub repo updated to work with the final bits when they are available next year. We're making sure that this book will be a great reference for anyone getting started with WinUI 3. To that end, I want to give some early thanks to Nick Randolph for lending his expert Windows developer eye to the book as the technical reviewer. His feedback on the chapters and source code has been instrumental in delivering a great book for Windows developers building new WinUI apps or migrating existing Windows apps.

Stay tuned for more WinUI 3 tips and tricks here on this blog!

Earlier this month, at the Microsoft 365 Developer Day event, Microsoft made several important announcements for Windows developers. Among them was an alpha release of WinUI 3.0. This is the second alpha release of the upcoming major update to the WinUI libraries, due to be released toward the end of this year.

WinUI 3.0 will be a major update over the 2.x releases. Outside of the WebView2, there will not be many new controls. The team is focused on building out WinUI to be a complete UI framework that can be built on top of either the UWP or Win32 platform layer for new app development. Developers can leverage C++ to build Win32 apps with WinUI or .NET to build WinUI apps with the UWP platform. It will also be possible to modernize existing WinForms and WPF apps with XAML Islands and WinUI controls. That's right, WinUI 3.0 will include XAML Islands.

Getting started with the WinUI 3.0 alpha requires Visual Studio 2019 version 16.4 or newer. You'll also need to request access to the Visual Studio extension that adds the new project templates for WinUI 3.0.

To read all of the information about the current alpha, including pre-requisites and current limitations, check out this page on MS Docs. Find out even more about the plans for 3.0 by reading the roadmap on GitHub.

Are you new to WinUI, UWP or XAML in general? Keep an eye out for my new book, Learn WinUI 3.0, coming this fall from Packt Publishing. I've just completed a draft of the first chapter, and I'm looking forward to guiding new WinUI developers in building their first Windows apps.

Hello WinUI developers!
I want to update you on my WinUI focus for 2020. Most of my spare time this year is going to be spent on my new WinUI side project. I am writing a book for Packt Publishing titled Learn WinUI 3.0. The book is due out this fall. That will hopefully coincide with a final or near-final release of WinUI 3.0.
As I am working on the book, I plan to blog about my experience with WinUI 3.0 through its preview and beta stages this year. If you would like to follow along, I encourage you to subscribe to this blog. I will occasionally cross-post or create summary blog posts on my UWP Tips blog to catch up with my UWP Tips followers. Your best bet to stay informed is to subscribe to both blogs (and WPF Tips, while you're at it).

I am well underway with the first chapter and plan to blog this week about my experience setting up the WinUI 3.0 preview and creating my first project. Spoiler Alert: No issues encountered yet.

I'm looking forward to engaging the Windows developer community this year, and I expect to spend a fair amount of time harassing the WinUI team. If you have any suggestions for the book or things you would like to learn more about, don't hesitate to drop me a line on Twitter or LinkedIn.
Thanks for reading!
Alvin

I just published a book review on my Morning Dew blog that may be of interest to my readers here. C# 8.0 and .NET Core 3.0 - Modern Cross-Platform Development is a new title by Mark Price from Packt Publishing. While it covers a broad range of .NET Core topics, there are chapters on both Xamarin and Windows Desktop application development. 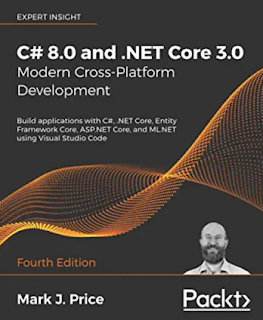 Announcing Learn WinUI 3.0 from Packt Publishing and a Contest

I'm thrilled to announce that my new book from Packt Publishing , Learn WinUI 3.0, was published in late March. You can buy your eBook o...